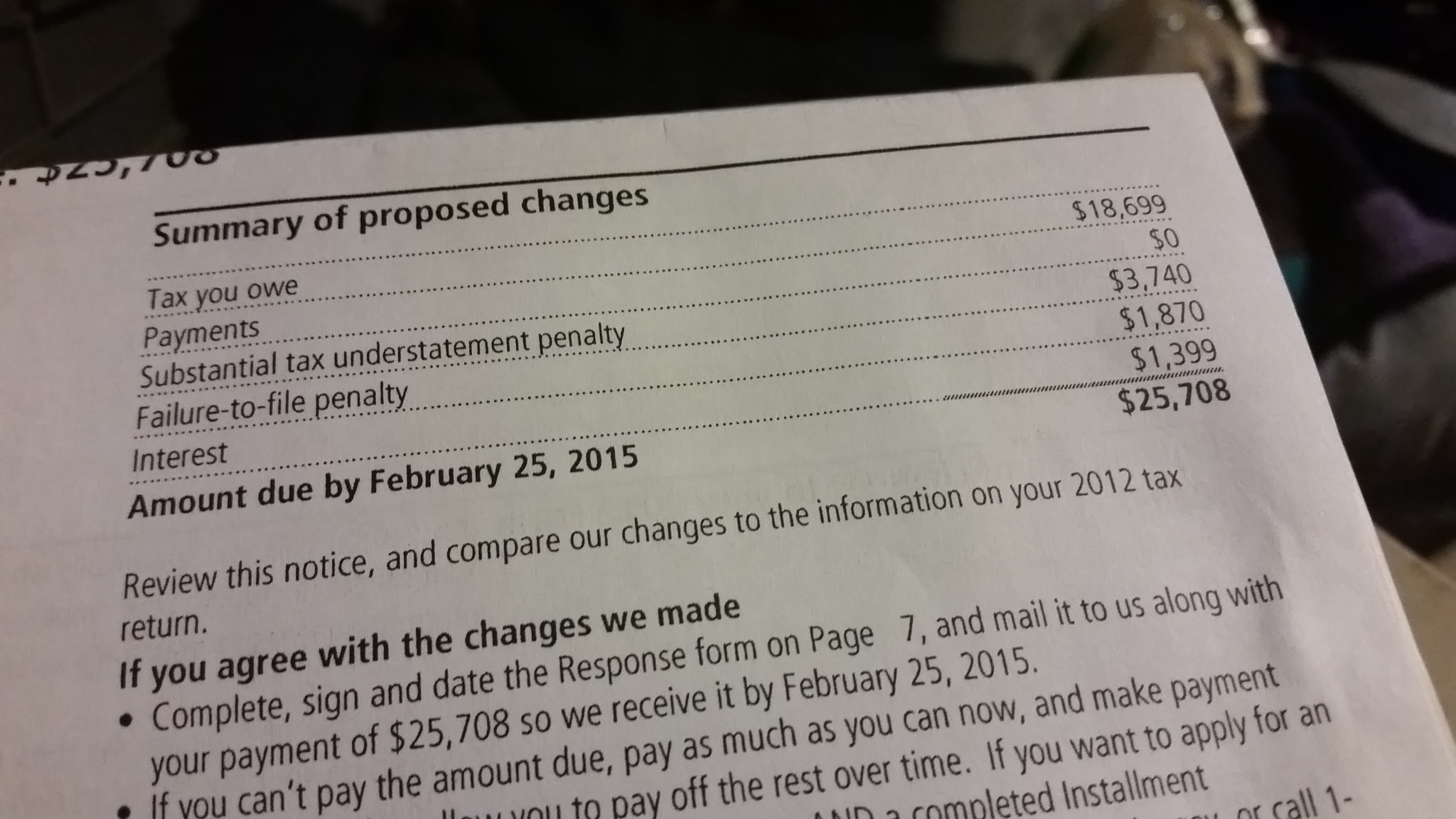 …is the culmination of a back-burnered fear tornado I’ve been dealing with in the last couple of years – mostly making that final adult transition into tracking my finances in a meaningful way.

To that end, it’s a $25,000 IRS tax bill for my 2012 finances, which were rather off-the-rails odd as far as the IRS goes. (I’ve already paid for every other year, except this last one, which I will pay before April 15th).

People generally treat their finances private, but I’m not generally people, so I thought I’d quickly touch into what this all is. 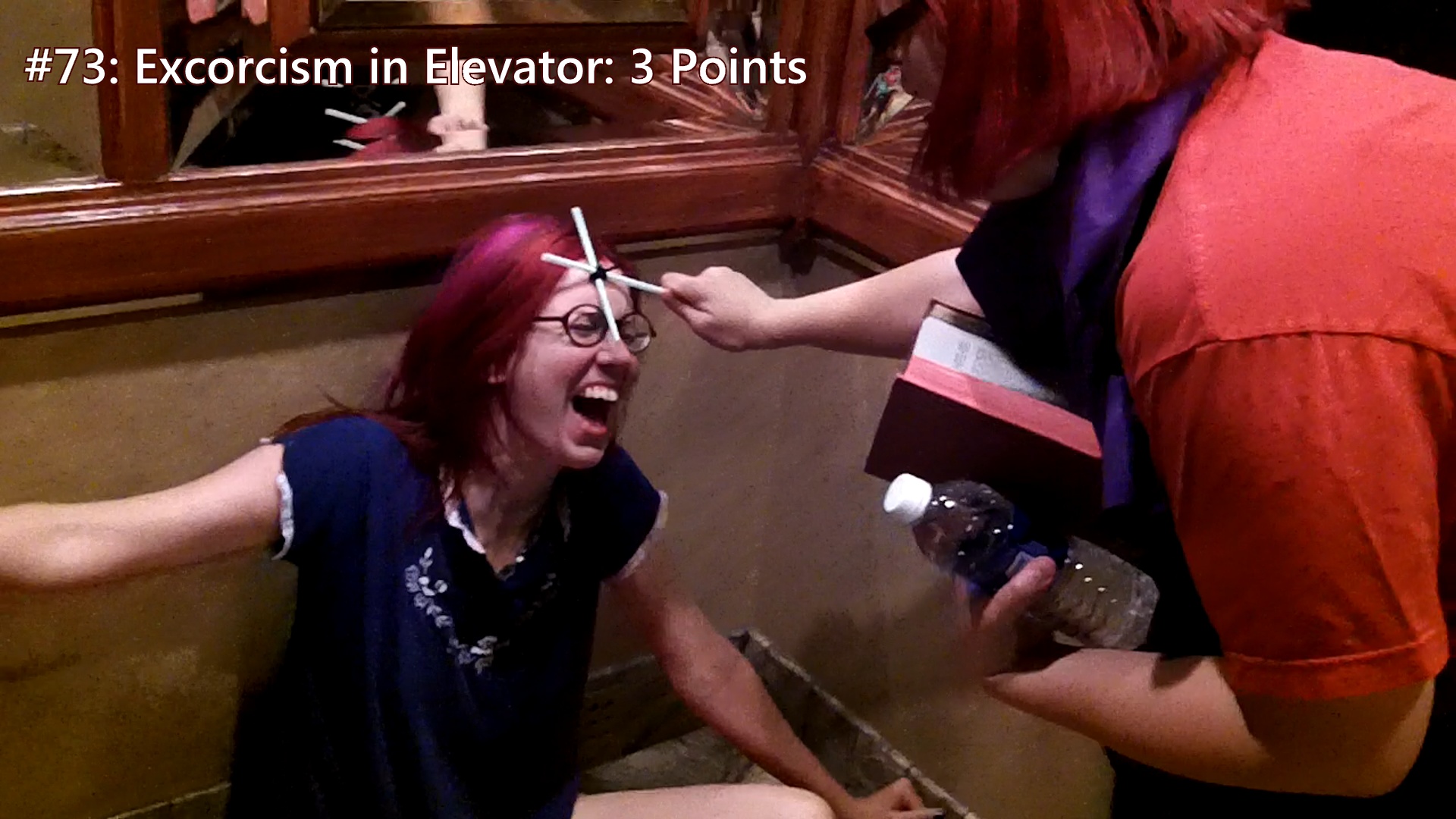 When I got offered the job of shooting the DEFCON Documentary, I came up with a number for being paid (outside of the budget of the movie). That amount was how much credit card debt I owed, plus extra for other debts. And man, did I owe a lot of credit card companies a lot of money – $19,000, to be exact. And that number was not really going down very well.

By that point, of course, a payment plan had been organized with the credit card firms, but the terms were pretty onerous and they were still charging some amount of interest. One wrong move, and they had the power to do some ridiculous stuff. I wanted out of the credit card world, and so this DEFCON money was money that would really help me.

I got the payment, and immediately wrote out three massive checks towards the companies (two of them were Bank of America at that point – the third was Discover). And I knew I was walking away from the dragon when I intentionally overpaid Discover by $500 and they very nearly had gotten interest in the intervening time from the last bill to overtake that $500. As a bonus, I told them to close the accounts, all of them, and both put me on the oven for trying not to leave, and then Discover didn’t actually close the account – 3 months later I got a bill from them. Oh, the noise I made. Again, this was at the end of writing three checks, three fat checks, for the full amount owed, and then some.

So, credit cards. Out of my life. Gone. Owe them nothing. yay. 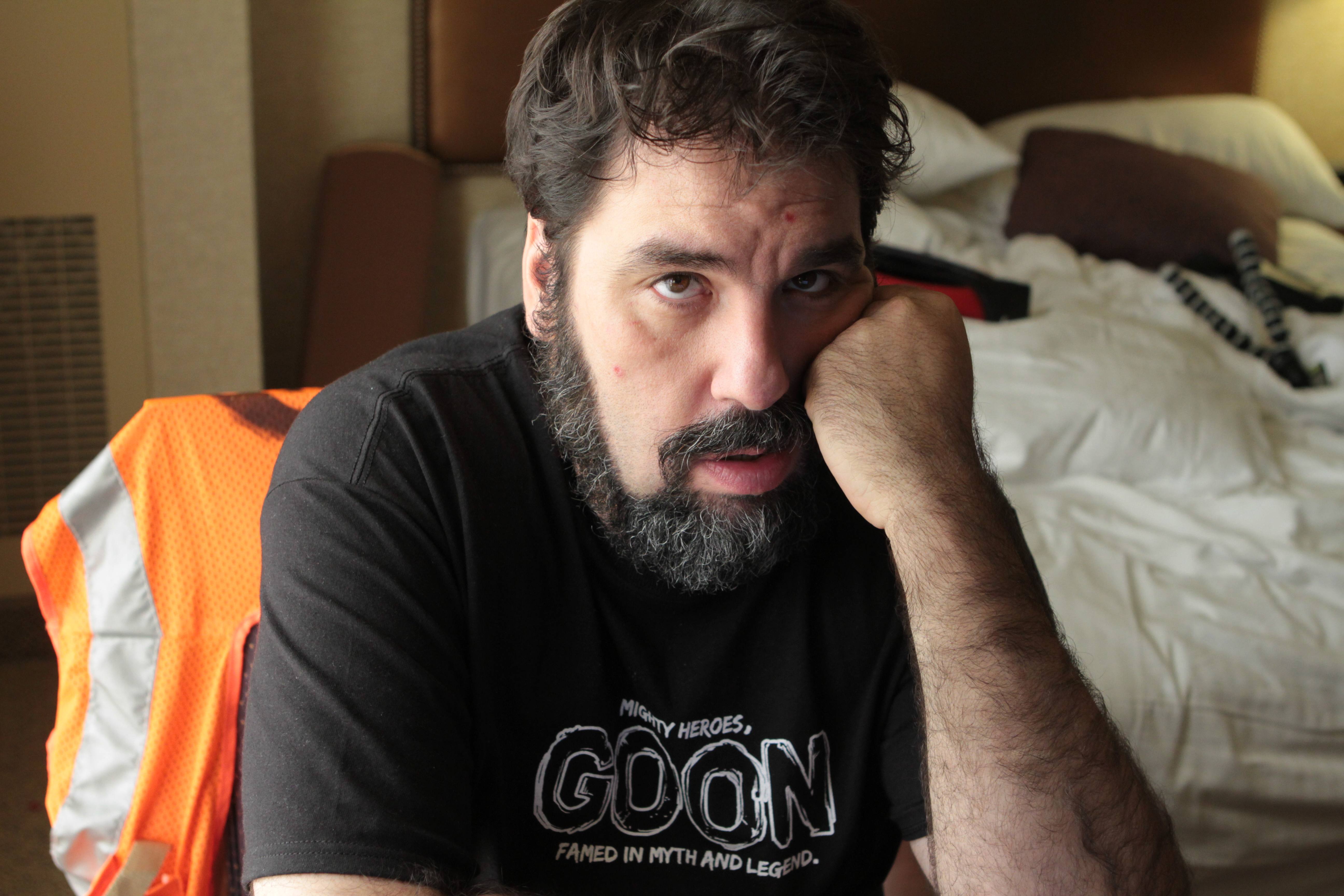 But after I filed all my taxes in my own, stupid way, I had made a huge, huge mistake, which is that I didn’t properly list the DEFCON money. Frankly, it was out of my mind – they’d given me some 1099 stuff (they’re a legit organization), and I hadn’t listed it.

This, it turns out, really angers the IRS.

So when they sent me a tax bill set that was something in the $40,000 range, that effectively got my attention. In the intervening time, I hired an accountant, went through ALL my finances on every side, and found write-offs as well as repairs, and generally re-arranged how I do this whole income thing. I should also note that I actually had a refund in 2013, and I suspect 2014 will be the “normal” amount a fellow pays for his salary and other income in the world. I’m not letting this happen again. 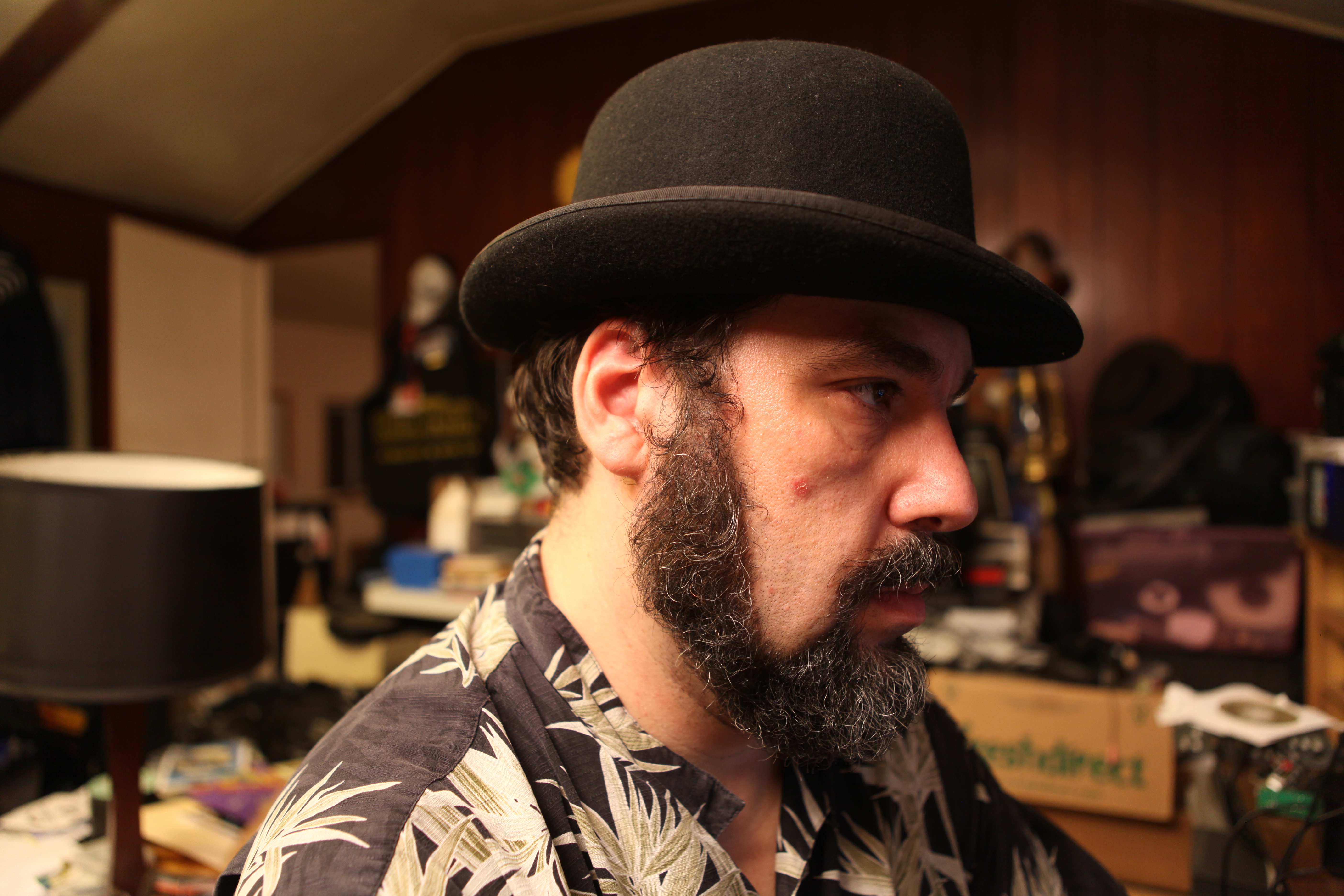 So, there’s pros and cons to sharing this – I’m sure I’ll get some level of jibes, or references. But be clear – I did this to myself. Nobody snowed me, I wasn’t told one thing and given another, and I certainly didn’t find myself at the mercy of some clever manipulation of The Rules to get me here. This was a legit mess-up and 2015 will have a non-trivial percentage of my time being spent paying this off.

I make a decent salary, and I knew this was coming, hence my request that any speaking engagements cover lodging/travel – I just can’t afford it for now. And I definitely won’t be covering too many dinners. Also, ketchup in water makes soup.

Life won’t be exactly a hardship, but it does cut me down in terms of leeway. No problem – I’ve weaned myself off of most expensive habits and I really enjoy working on stuff in my house and visiting people who are near me. The saturation may be a little down, but the year won’t be grey.

But that’s not really the reason I’m sharing this.

The reason I’m even going into this is because there’s a situation that affects some of the communities I run in, be they hacker or tinkerer or otherwise “smarty-smart” groups. And that’s the two big fallacies about financies: If you’re smart in how you do programming or tech or math, then surely you should be a taxes/finances genius…. and that if you don’t execute brilliantly along your monetary aspects, this is a shameful situation you must never bring up and hide.

I call bullshit on both.

I call this out and I step forward because in mentioning, conversationally with friends and associates, of the stress of this situation, people would reveal that they too had experienced run-ins with the IRS and general finances – either due to taking on too much debt, or misreporting income, or not understanding how penalties and liabilities affected their income.. you name it. Some had been garnished wages. Others had transferred funds in various places. Someone who I know who would rather I not tell you anything else about them was signing checks over to his wife so that it wouldn’t be immediately garnished in lieu of mess-ups from 1998.

Hiring an accountant, a good one that walked through things with me and gave me the homework assignments (with guidance) that allowed me to re-factor all my finances into something sensible and boil it down to a single bill… that was the best decision I made in all of this. He helped me go through years of materials, and we took a $37,000 bill down to $20,000, which cost about $1500. I may be financially dumb in some ways, but paying $1,500 to get back $17,000 is a heck of a deal. I wish I had more deals like that. 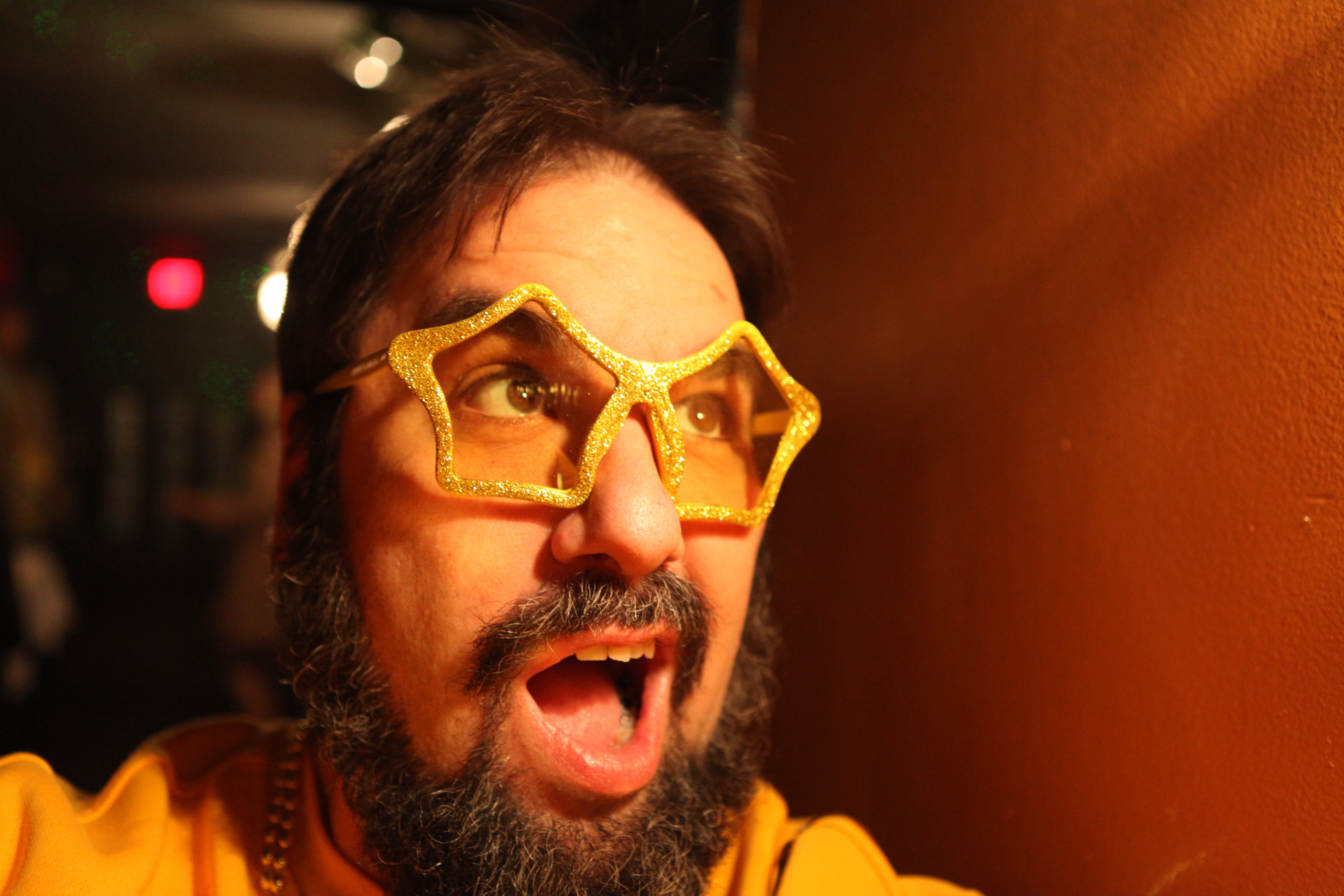 Stepping out from a miasma of concern and fear regarding my finances into one of understanding and clear, present goals has been a breath of fresh air. It was, truly, one of my remaining huge emotional fears and concerns. And while one might not call having a $25,000 bill being out of the woods, it’s a single number. I can work with a single number. I understand a single number. So that, among all my other goals this year, is to get that number gone. Here’s hoping.

Again! You are not stupid! And you are not alone!

(Some percentage of people might kick into some “help Jason’s tax bill” mode, and I’ll just say – buy documentaries if you’d like, get me speaking engagements with honorariums, or just relax – I’m sound of mind and body, I will earn my way out of it.)