I am going through a massive pile of CD-ROMs I bought on auction. For $40, including shipping, I got something like 200-300 CD-ROMs of shareware, trials, cover disks and random what-have-you.  I had another package from a contributor who sent in his collection, so the number’s probably closer to 300. That’s a lot of historical data! 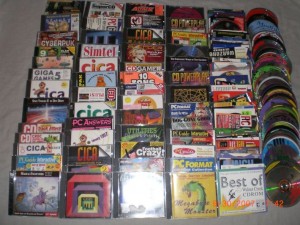 This marks the big move into cover discs for me, those attached-to-the-front CD-ROMs (later DVD-ROMs) that were able to give you endless demos and promises of great games that may or may not have ultimately materialized. I didn’t go after these much initially, trying just to get all this other data up, but it’s time; many of these cover discs are over a decade old and it’d be good to get them while they’re still gettable.

The number of doubles hasn’t been so bad, and a couple weirdo random ones have shown up, stuff from mars I’ve never heard of that probably sold less than a thousand copies at best and which disappeared into attics and basements soon afterwards. That’s often where the rare stuff shows up, deep in a directory, mis-named, waiting for a robot or a really bored person to find it.

So, there I am, transferring untold buckets of data from PC Gamer, Computer Gaming World, and the occasional “best of shareware we yanked from who knows where” when I found a CD-ROM, entitled PowerPak Gold ’92.

Now, what makes it is not the simplistic clip art title or the evocative name (a lot of these CD-ROMs have titles with phrases like “gold”, “power”, “amazing”). It’s certainly not the fact that it has 600 megabytes of shareware on it or that it comes out  pre-designed to be used by BBSes.

No, what makes it is that the price for this single CD-ROM is $90 dollars.

And not just in the form of a price tag stuck to the outside of the case; I mean on the top right of the cover art, the price is printed right into the packaging: $89.95. That is a lot of fucking money for a CD-ROM, of any stripe, much less one that basically has shareware on it and is composed of data taken from public sources. The phrase “highway robbery” is usually used when you have no choice but to buy and are being gouged, and that’s obviously not the case here, but still, the phrase “galactically overpriced” still applies.

I’d have probably never looked at this specific CD twice if I hadn’t seen that price up in the corner, but here I was, interested, so I started doing some research. Things got really fascinating really quickly, so here are some things for you to browse, assuming case law and pornography fall under your Interest Umbrella.

The CD is made by a company called “Florida Lion’s Den”, which I’d never heard of. But in the years since I first started textfiles.com, an awful lot of information has come online and once you get the right “trigger phrases”, searching around can yield all sorts of hits. And more every day. So “Florida Lion’s Den” came right up.

In a court case. A very interesting court case, as it turns out.

Here’s the Google Scholar version.  Either you really like reading case law or you really don’t; as someone who’s gone through the occasional lawsuit, I know enough of the language to not get floored by it and see where stuff went, so I’ll go ahead and summarize for you.

PowerPak ’92 3.0 comes out, as far as I can tell, around May of 1993. (I assume there were previous versions.) A month later, related to said previous versions, the creator of a viewer program named VPIC on there, Robert Montgomery, sends a lawyer letter to them in June of 1993. Lion’s Den ignores this letter, and Montgomery sues them in October of 1993. In November of ’93 he gets an injunction to prevent his program (VPIC) to be used on their products.

The case does not go to court until March 1995, at which point it goes before a jury. The Jury finds Florida Lion’s Den guilty of infringement of VPIC’s copyright, and Montgomery is awarded $30 for trademark violation, and $80,000 for copyright violation. Oh, and $142,000 for lawyers fees, and $6,500 for miscellaneous costs. That’s a lot of money – $228,833.34, to be exact. Naturally, Florida Lion’s Den appeals.

The appeal is finally ruled on in 1999. 1999, six years after the legal proceedings started – apparently this sort of glacial movement occurs in the courts of law, but think of how much computers and communication change between 1993 and 1999. The appeal, by the way, is denied, meaning that Florida Lion’s Den, Blaine Richard (who worked for Lion’s Den) and Rebecca Noga (Propietor of Lion’s Den) owe Robert Montgomery a hell of a lot of cash.

MONTGOMERY v. NOGA (as this case was called) is still cited in a hell of a lot of cases: check out all these hits on Google Scholar.  The killer aspect of the court case was whether Montgomery had truly transformed his shareware program into a commercial program by doing a few additional changes and declaring it copyrighted; the court said he had, even though the amount of changed code was less than 30 percent.

OK, so that’s a lot of money behind this ninety dollar shareware CD, but then the question comes of if Rebecca Noga is starving in a trailer somewhere, eyeing specials on dog food at the local shopper’s mart. Well, that’s probably unlikely.

Looking up her name shows that Florida Lion’s den is behind the Busty Babes CD-ROM series, which was a collection of photos of girls with huge racks which you could put on your BBS and make available for sale. From this, she made a lot of cash. I found an Orlando Sentinel article about her from November of 1994, a year after the lawsuit began from Montgomery, and years before she lost the appeal.

The article’s tone is interesting, because the implication is that she’s a rough-ridin’ lady who is finding herself put down by the suits: “The suits nearly put her out of business, but Noga, a motorcycle-riding, tattooed former firefighter, refused to give up.”

Now, why are the suits putting her down? Well, because her CD-ROMs had images from Disney, Time-Warner, and Playboy, among others. In other words, she was taking photos she didn’t own and selling them for money. A lot. Even though the article mentions she had to lay off half her four person staff, she mentions being on track for making a million and a half dollars for 1995. It also mentions her other CD-ROMs, including one called Ecstacy Hot Pics.

And another court case.

A sysop who had sold a number of adult CD-ROM was found guilty of obscenity in Oklahoma, including selling CD-ROMs made by Florida Lion’s Den. Here’s the appeal of his sentence that was denied in 1996. The sentence was for 25 years. 25 fucking years. Plus $32,000 in fines. The trial court later got it knocked down to ten years, a $2000 fine and 500 hours of community service.

Not surprisingly, when I tracked down this sysop (who ended up spending actual jail time of years from this case), he wasn’t all that hot to speak to me and my documentary. Bulletin Board Systems hadn’t really done well by him, all told. Oh, and as I found out from others, did I mention he had previously won the congressional medal of honor? Yeah, real bad character, there.

Why am I going into all this? Mostly, as I watch various issues get knocked around in the twitterverse, or the blogosphere or the whatever, there’s this sort of light banter quality, a feeling like people are just playing the part of miffed or miffing, acting like it’s all very important and lives are at stake, and yet, at the end, it’s all in good fun.

It’s not in good fun. These little pieces of plastic, these round little nuggets of history I put up on CD.TEXTFILES.COM and related materials I make available – these have some true pain behind them, actual and real pain. There are things you can do in one state or online that will get you in the fucking klink for years in another state. That Jury wanted 25 years of a man’s life because he sold CD-ROMs they didn’t like. They wanted tens of thousands of dollars from him after he got out. Meanwhile a woman stole images from Playboy, Disney and who knows else, sold those same CD-ROMs by the truckload, and made millions. 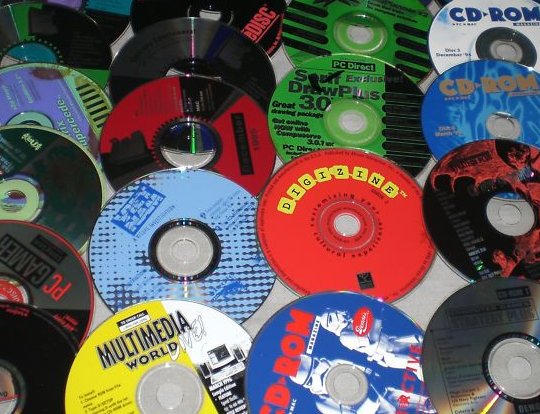