The short form of this weblog entry is that I am looking for employment, and would like the job to be one that is happy to hire me.  If you are a concern or entity that might consider hiring me, please mail me and I’ll send along my resume to you. Questions or simple non-committal inquiries are also welcome.

My father worked for IBM for 30 years, starting in the late 1960’s and well into the 1990’s. IBM was the reason I was born in the town I was, with the IBM plant down the road and my father investing in a new development on what was once farmland to build a new home for his soon-to-be-growing family. His titles, from when I first started paying attention to them, were gibberish to me: compound-phrases with “manager” or “technology” or “research” scattered among them, and all I saw was that he wore a tie and disappeared for most of the day. If you had asked me, at any time, what my dad did during those years, I’d say he “worked at IBM” because that’s what I saw it as, a job involving some sort of entering of a giant conglomerate morass.  He brought home computers from the lab that he borrowed for his son to try, and this was very successful in interesting me, but it didn’t tell me, specifically, what he did.

When I got into my snotty phase, somewhere in my early teens, I just started calling him “The Cog”. This, I might add, to his face, as one might call someone “pops” or “smitty” or whatever. 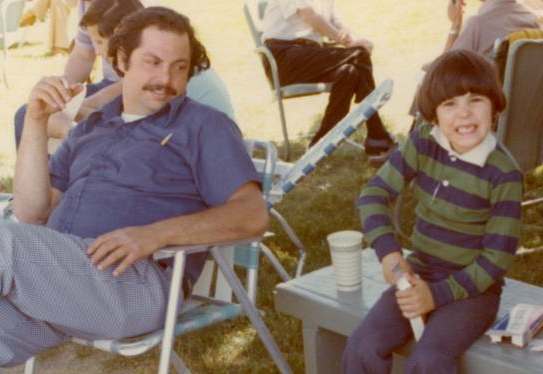 The reason for calling him “the Cog” was my perception of his life at IBM – that he was a simple turning part in a huge, dominating machine, and that should anything go wrong with him or the machine would find him redundant, he would simply burn out, and a new cog would be snapped into place instantaneously, as if he never existed. Harsh, I know, but we’re that kind of family, if any of my other weblog postings help to indicate such. It was, in most ways, an endearing nickname, but the perception was real – that my father’s work was nameless, faceless, uninteresting and easily replaceable by forces unknown.

I say that, but in point of fact my father was valuable indeed. He worked, as I said, for many years for IBM, at one point being dropped off the official roster because of their huge restructuring in the 90s, but then being hired immediately back as a consultant. After he fully retired from IBM, with full benefits and a pension, he was scouted and went to work for ex-IBMers at other companies, gaining greater and greater responsibilities at those companies as well. In other words, he was anything but a cog; he was a prized part of the endeavors he was a part of, and when he essentially retired for good, which is how he is these days in his late 60’s, he could focus on his new loves of painting and travel with impunity. One could hardly ask for more.

When I was laid off, let go, or whatever term was used, the process was, shall we say, sterile. Sterile like a hired cleaner brought in to dispense of a library’s collection or a hapless relative tasked with selling a well-tended car on Craigslist, its owner long gone. Imagine being asked a couple of questions over a few months – your current vacation list from the year, your availability a certain week. Imagine being brought into a room you never visit, and being read a paragraph off of a laptop explaining why your employment with a company is coming to an end. Read, I might add, with no eye contact, a pre-formed script written long ago and at a different place, intended to state in the most general and non-hostile of phrasings why you shouldn’t show up tomorrow.

My term came to an end after 13 years at the company (save a year elsewhere during rough times for the firm, a self-directed furlough). 13 years of often-difficult work, of 24-hour on-call, of treacherous drives in snow to repair failing machinery and shared moments of elation and teamwork and pulling off the difficult or the impossible.  As explained by an accompanying voice on the speakerphone, I was not to return, I would not be in the building ever again, any major items would be pulled out of my cubicle and sent to me at a later date. And then I was escorted out of the building, asked for all company material on my person, and left standing in a courtyard.

And the bastard wanted to shake my hand.

I had things to do and stuff to sort out elsewhere, but it was truly a week or so later that I made the major realization.

I was the cog.

My father’s job ended with dignity, punctuated towards the end with a 30-year ceremony in which his children were invited to come and have his long term with IBM lauded by co-workers and manager. A small gesture, but meaningful, and accompanied with a small gift from the company, an appreciation above mere salary for his years given. He was not a replaceable part in so many words, although of course the company did eventually move in directions not needing his talents. He took his breath in and moved to the next adventure.

I make this declaration and revelation not for pity, or concern, or a comment stream filled with pedantic explanations of modern workplace reduction procedures. It’s simply to point out that I let myself spend many years in an environment that, ultimately, had little use for my real talents. Sure, I wrote scripts that reduced overnight alarms by a significant percentage, and I installed more parts into more servers than I could ever possibly count. And I definitely could triage a problem with the best of them, bringing near-minutes turnaround on failures that could threaten the stability of rather important and wide-facing systems. But this was not joy I felt when these things happened, only the grim regard of a needed repair being executed before turning to the next mundane hoop.

Compare that, if you will, to being told of people attending conferences specifically to hear my presentations, or teary-eyed conversations about my documentary work. Delight from finding nearly-lost history, or accolades for archives and collections and writing in all matters I choose (and the important term is choose) to address.  Imagine a slightly bumpy red line in the center of a graph, and then a blue line of highs and lows waving around it like a jagged mountain range. At work, hours a day, I lived the red line, when I wanted the blue line of life outside work.

Therefore, I am making it clear that I am looking for employment, and places and persons who think they could use someone like me should feel free to contact me for my resume.  My resume is odd and varied, but it represents a passionate person who wants to do in his days what once he could only squeeze into variant stretches of snatched hours. I wish to have a place that’s proud of what I do, and can use those skills, and will consider it a thing worth talking about, something worth mentioning to others, and worth working with me to accomplish even more.

Surely, out there, is a group who is looking for someone like me.