Back in the mid 1990s, when the Emulation Craze really kicked in and before MAME flattened the playing field once and for all, we had a lot of emulators out there. Some were single-purpose: they emulated a single video game, and generally very well. Others were multi-machine, usually focusing on a set of games that used the same chip. Only minor differences were on the inside between these games, after all, beyond a feature set or two. One might emulate a bunch of Midway games; another a bunch of Atari games. It was a great time and I enjoyed it immensely. I still do.

But the best kind of new program in a field stuffed full of them is the program that solves a problem you didn’t even know you had.

Most of the emulators were dedicated to getting the ROM data from the machines to display on your computer, and take controls from the keyboard or mouse (or joystick in serial port) and do what was needed to let you play an old game. You might get a control panel screen to let you reprogram the keys (sometimes) or a set of options to scale the resulting image generated by the emulator. Maybe. But that was about it; you “emulated” the program and you were done. Onto the next project.

But not so with one emulator that quickly shot (for me) head and shoulders above the others: Vector Dream. 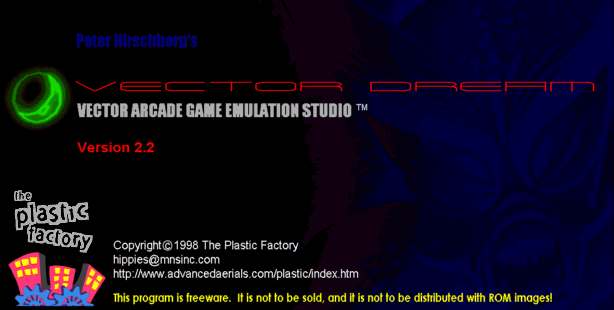 Now, this was an emulator that didn’t rest on its laurels with simple emulation of video games. Its chosen arena were a collection of Atari vector video games: Asteroids, Asteroids Deluxe, Tempest, Lunar Lander, and others. You could read about the games (instructions for them were included), find out what ROMs you needed, and change the configuration of keys. Very normal stuff.

But in the rest of the configuration screens… ah, well here was all the difference. Check out these sound options: 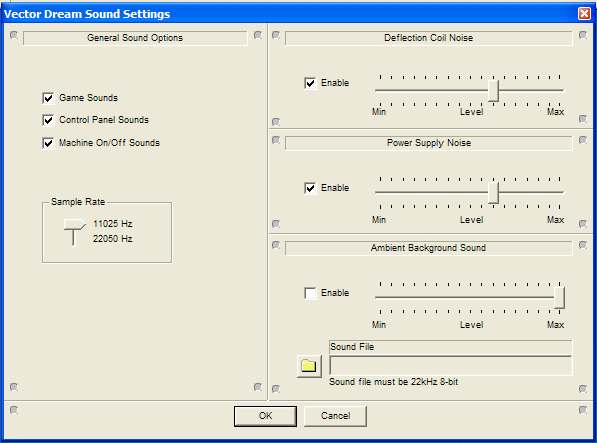 And check out these drawing options for the vector-based games:

Do you see what I saw? Settings for deflection coil noise? Settings for glowing vector lines, settings for the buzz of the power supply? Not only that, but when I just played the emulator a bit, I noticed that the screen emulates burn-in! The black letters from the attract screen sit in the bottom and upper left of the image, just like an old monitor. Wow.

A programmer assigned the ROMs of an arcade game who didn’t spend much time playing them might focus on getting the rendering to be “correct” and then work on the next phase. Peter Hirschberg, the creator of Vector Dream, had been living and breathing with these machines. He knew what made them special, and what part the hum of the machine’s parts played in the experience. He owned all the machines he emulated here – and he drew from real experience. This is vital to living that time and playing the gameÂ if your interest is to go beyond mere rote approximation and move closer and closer to “being there”.

Let’s be clear – I’m not turning my nose up at people who boot up MAME, bang out a few levels of PAC-MAN and get back to writing some e-mail. I’m especially not faulting or being troubled by people who take, say, DOOM and shove it on a cell phone and play it on the commute to work. Good enough! You’re playing something, and the inherent rules/experience of the game is so well-written that a lot of the experience can be stripped away and you’ll get something out of it. That’s fine.

But to have the option, the possibility, of experiencing something a little closer to what the original game was like, and having the option of adding layers of senses that you otherwise weren’t engaging by playing it online, well, then, that’s good for the sake of history. And so painless, once it’s in place.

So imagine my delight at finding that Ian Bogost, who partnered with Nick Montfort to write Chasing the Beam, that treatise on the Atari 2600 I mentioned recently, tasked some students to make Atari 2600 Emulation take another great set of strides.

In his announcement, Ian solves a problem many people didn’t know they had – emulators of the modern age render on incredibly sharp and color-specific LCD monitors, which means that we have it better and brighter than generations before us ever knew.  But it also means that the experience of an actual beam blowing across a piece of glass and lighting up the junk coated on the back side is obliterated. This is, as I just mentioned, a problem. Not a feed-the-hungry sort of problem, but a problem nontheless. And all it took was a handful of students to begin to fix it.

Ian had these students of his construct new routines for emulating old TVs. Here’s an example of the difference between a standard LCD and the new filters:

See, in most cases, the bottom half would be the improvement – and it would be an improvement if the programmer had intended things to be seen that way. But as Ian smartly points out, this was not what the original programmers of the Atari 2600 (and other home console systems) worked with in the 1970s and 1980s. They worked with Televisions, good old moving-beam thanks-Philo-Farnsworth monsters that blurred ever so slightly and glowed when stuff hit the glass. This is the gift being brought to us.

Is it perfect? Of course not. TVs were different in different ways, the glowing was good in one set and blurred more in another.. but even the fact that we can now frame the conversation that we’d never had before is a sign of how things are progressing. The team plans to have the Stella Emulator (an excellent Atari 2600 emulator that has my name in the credits!) incorporate these new routines. And since the emulator is open source, these routines can be tweaked, modified, and imported into other emulators, or screen savers, or what have you. This is very exciting news, to those of us who get excited by such things.

Again, it’s the joy of seeing some flavor of life that is being lost returned in a somewhat sterile but still active manner – this is what saving history is about. It’s not just about words and putting every dot in the same place. Thanks, Peter, for bringing up that conversation – and thanks to Ian and his team for continuing it.