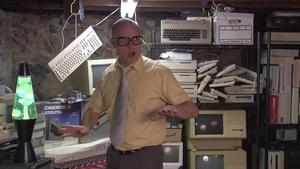 The rise of “post mortems” in relation to games and other software projects is kind of interesting; it has rarely been the case that groups would trumpet what they did wrong or would want to change about something they just finished before. I suspect that for some it’s a case of being able to exorcise internal demons, or to talk through concepts or lessons that they might not otherwise explicitly regard. I’ve heard post-mortems that are basically a case of “Man, looking back, perhaps we just did everything so damned perfect we may have set ourselves for a lifetime of disappointment”, but I assume this is when the marketing/management gets a hold of the materal. In my case, the project is a video one, and I’m also the management, so that’s probably not going to happen.

So with that weird introduction in mind, let me write a bit about the now-completed “It is Pitch Dark” MC Frontalot video and my experience with it.

To recap, I contacted a large number of people in regard to the BBS Documentary and doing “stuff” for it. Among these was MC Frontalot Nerdcore Rapper exquisite. I like his stuff and I thought he’d be fun. Unfortunately, he indicated he was too busy. After the film came out, we bumped into each other at an event and he indicated that he regretted not contributing something, so I mentioned GET LAMP, and he signed on. A few months later, “It Is Pitch Dark” appeared, and we discussed the possibility of me shooting a music video. And he agreed to it, and there we go.

That video was officially finished last week (that is, I finally coaxed a few minor changes into the editing that nobody would notice) and delivered it to Frontalot. It’ll be released at his pleasure in the coming months in a pairing with the release of that song as a single. So this entry doesn’t have a link to the video, in case you’re scanning it for such.

I heard the song about a week and a half before the filming of the video. I’d heard a demo version a month and a half before that, so I knew the general approach, although half the lyrics were missing. A limitation that was made known almost immediately was that Frontalot was going on tour within a week. This basically worked out to about 4 potential shooting days, all things going well.

I had a meeting with Frontalot at the local hacking hangout (he’s staying locally to me for a while, which helped a lot) and we discussed ideas. I had a whole range of ideas of possible things the video could have, and he had ideas too. Frontalot had very little in the way of “will not do” rules to put down, and the main one we were both in agreement about: no parodying of other rap videos. That is, we weren’t going to put Frontalot into “bling” and make him pose near dubs and act like he had weapons and strippers falling out of his “ride” and all the rest of that. I told him clearly I wanted to make something where other people would find stuff to parody. That is, original new stuff.

The original plan was for two shoots; one at my house, and one on a nearby college campus. The idea behind this was to have a sequence where Frontalot plays a text adventure and you see video of him doing text adventure-like things, like trying everything against a door, trying all doors, and so on. Then, we’d have text along the bottom of the screen telling you what he was doing, and so on. I also wanted him to have a made-up “office” that he’d be working in, loaded up with references and items relevant to computing and games and nerdishness.

So, what worked out:

What didn’t work out:

The video that came out was probably 60% what I thought it would be when we started planning the shooting. To be more explicit, it’s 60% similar to my plans. It’s 100% good, and I gave a sneak preview of it at Notacon, to good reaction. It’s a great feeling to sit in the back of an audience and feel how it all plays out, and it does the job. I hope it sold a few copies of his album right then.

Would I do it again? Sure. The production time was probably 4 weeks with that being probably 6 days of actual “work” involved, either shooting or editing or screening or refining. I had to delay GET LAMP for a little while this was done, but what a bonus feature it’ll be on the DVD set!